I got featured on Forbes ‘Under 30’ and this is how, step-by-step.

This email is going to be the ultimate humblebrag so I’m going to do my damnedest to balance it with the ultimate lesson. There are several lessons within this experience, but I’m going to touch on four in particular and can go deeper in future emails.

In addition to the lessons and bullet points, I’m also offering you a (list exclusive) gift. This gift doesn’t have conditions (otherwise it would be called a “deal”). While it’s not a tangible gift, I believe it will bring you tangible results and look forward to sharing those stories in the not so distant future if you’re so inclined to claim it.

At 2,419 words… this is my longest email to date, but I think it holds the greatest value and (according to this super nifty tool) will only take you 12 minutes to read.

This story, like many shared here, begins with the arrival of the end. It’s challenging (for me) to start writing a story when I can’t see a definitive end for which to aim.

Today, I’m going to tell you how this happened… 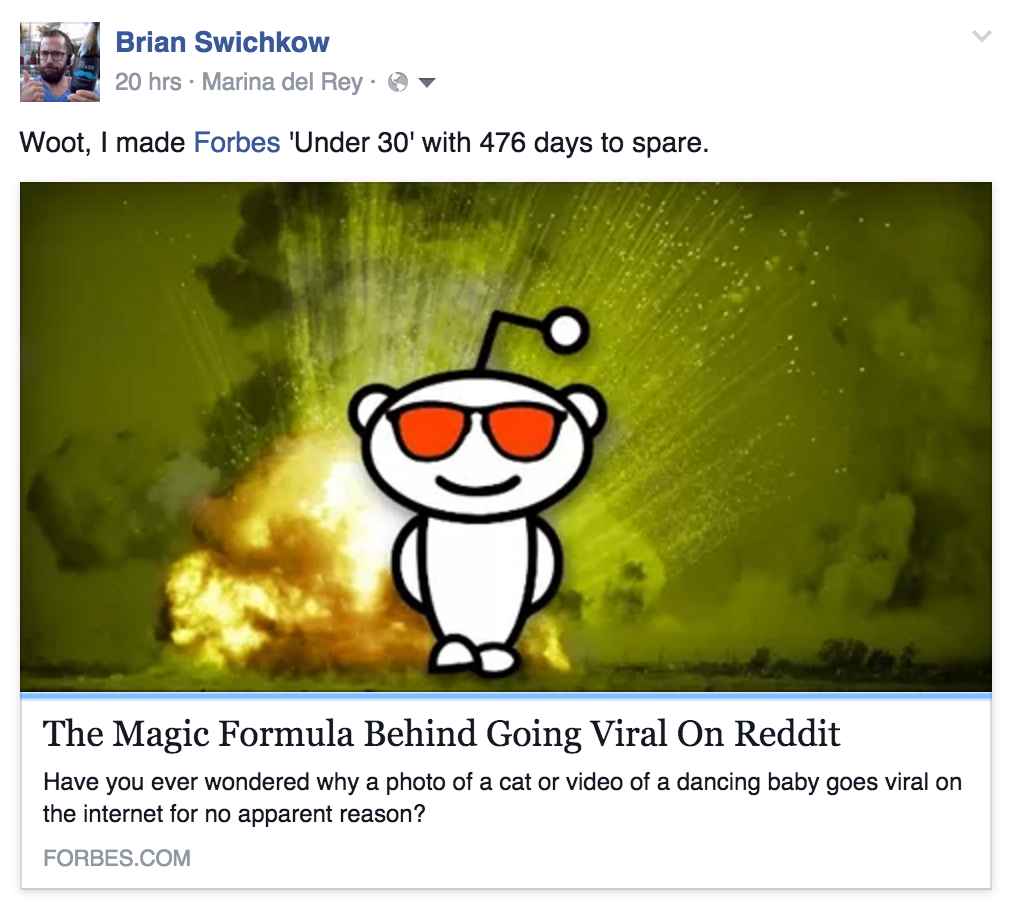 Since posting this on my personal Facebook page 20 hours ago:

I was also (pleasantly) bombarded with a wave of stories recounting how my loving parents, in stereotypical Jewish form, have seemingly shared this with every living human they can reach (friend, family, colleagues, rabbis, former teachers, etc.) 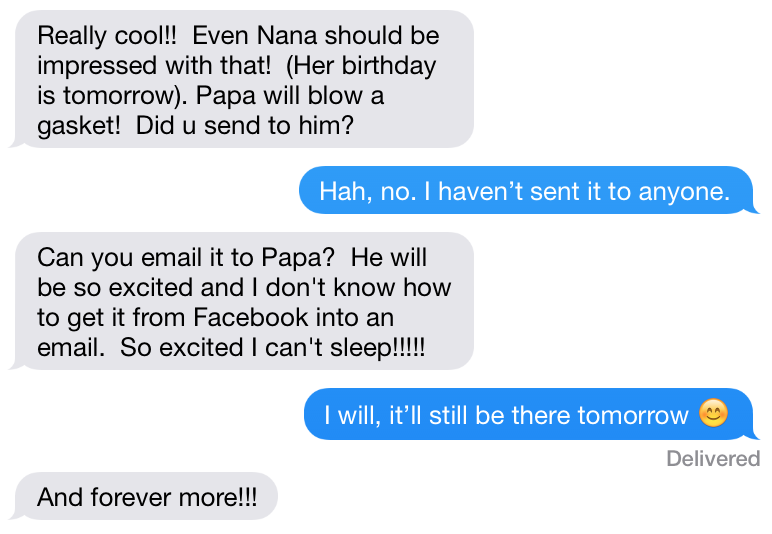 My sister is a doctor who married a doctor and had a (planned) baby in wedlock. Her achievements are significant in the eyes of my traditionally minded parents, but I’ve always been a bit of a Black Sheep for choosing the path less traveled. That’s not to say that my parents don’t love me, they do (often a little too much), but this felt like the first time my non-traditional lifestyle resulted in a traditional accolade. Their response, and particularly the above conversation with my Mom, drove home the value of the credibility that only press coverage can bring (more on this in Lesson 3).

The “measurable return” wasn’t too significant:

I did somewhat humorously receive this congratulatory message from a former client that owed me a non-unsubstantial amount of money. I’ve moved on and foregone the five years I would have spent in court fighting him, but humorous nonetheless.

Different story for a different day, but this was hands down the smartest thing I’ve done in my life. On the brink of a lawsuit for lack of commissions paid, I found four friends for whom I had a great deal of respect and had gone through the process of suing someone. I interviewed them about the experience and asked if they’d ever do it again… none said yes. I wrote a (thousand word) letter to him saying, “I’m not happy with how you do business, but I accept my responsibility in the miscommunication and still appreciate you as a person. Best of luck.”

Back to the Forbes thing…

The response to this getting posted has been (and continues to be as I write) utter insanity, but it drove home some lessons I had previously thought to be insignificant.

Most of you already know the story of the Facebook ads prank and saw the formula for that craziness encapsulated in the formula illustrated a few days ago.

Do something ridiculous and absurd, but execute it unnecessarily well.

For the sake of brevity, I’m going to skip over that as it’s not a necessary first step.

The true beginning of this story starts in Mexico at Awesomeness Fest, a conference (party) that self describes itself as an “invite-only transformational event.” Their format has changed quite a bit since I attended, but I can’t recommend it enough.

Part of its magic is the size, a maximum of 260 people are invited to attend each session which happens twice annually. By the end of the week long gathering you’ve pretty much talked to everyone at least once. One of the people I met at this event was the reason I ended up in Los Angeles, others I met were the reason I stayed when that partnership didn’t work out. None of this has to do with the Forbes thing.

I could lie and say that tangent was relevant, but it was really just me setting up the story. With each day of trainings followed by some insane theme party, the entire trip was a bit of a whirlwind. The final night, I found myself drinking in the executive suite with Vishen Lakhiani, the founder of MindValley, who hosts the conference. Super fancy? Yes and no. Any story can be truthfully told more glamorously than the reality.

Anyone who was still in Mexico, and still standing, was in attendance (all told, about fifty people). I was sober(ish)… because a week of open bar takes a toll. That was where I met Jules Schroeder, the now writer of the Forbes article. Back then she was a marketing consultant and nerd enthusiast. We talked about the Facebook ads prank, viral content, and how brain dead we were as a result of this conference. It was a casual thirty minute conversation and we added each other on Facebook to stay in touch. I’m still amazed people want to be friends with me after that prank.

Almost a year later, Jules hit me up to ask for help with her Kickstarter. She had asked in an extremely kind, considerate, and non-douchey way. As a result of her consideration, I jumped on a call and we had a super friendly, hour long chat.

Jules dominated that project and started looking for a new challenge. She ended up settling on the idea of a podcast branded ‘Unconventional Life’ where she would interview “successful individuals in non-traditional ways” and reached out to me for an interview. This series, before even launching, was (as a direct result of Jules’ splendiferousness) picked up by the Forbes ‘Under 30’.

If this sounds like another tangent, I assure you it’s not.

Jules didn’t write for Forbes when I met her. She (to my knowledge) didn’t have an audience. Both statements are equally true for the day I jumped on a call to help her launch her Kickstarter campaign a year later. Jules and I became casual friends, orclose acquaintances depending on perspective, because we genuinely appreciated each other as human beings. The “hey, can I talk about you on Forbes” thing was nowhere in sight… and that drove home a lesson of which I’m continually reminded:

No end, able to be seen from the beginning, will evolve into something greater.

Over two years and across two podcasts, I’ve interviewed over a hundred people with degrees of successes that are as expansive as they are varied. I’ve  pestered countless more at bars, cafes, and events. Politely pulling information from people, for me, is a learned skill. The opposite (delivering answers) is also true, but I have far less experience in that regard. The times I’ve been interviewed could be counted with only my fingers, but I have a rather unhealthy obsession with listening to my own interviews so I can judge myself and educate myself for the future. As painful as it is, I listen to identify the times I interrupt, ramble, side track, etc. This interview was, in my opinion, the best I’ve ever given — here’s what I followed:

Ryan Holiday’s book ‘Trust Me, I’m Lying‘ only served to reinforce my beliefs that the media is easily manipulated. While I’ve constantly tapped the insights Holiday shares in this (must read) book, I never really sought “press” for myself because it seemed (to the argumentative child in me) trite and meaningless. I didn’t use those tactics to land the interview with Jules, but holy shit… the aftermath has radically changed my perspectives on the value of press coverage to promote a personal brand.

As quantified above, the response to this article in the first 20 hours of its life (despite only being shared to my profile) has been overwhelming to say the least. When you stop to consider that me getting featured in AdWeek was the (unfortunately) sole reason that I got a second date with a cute blonde (she Googled me) a year after it was published… the thought of what might come from this article over the same time boggles my mind. As much as I want to discount how much this wasn’t a big deal and that it was just “my friend Jules” asking me to share my story… it’s significant.

I’ve landed two of my own podcasts and those of eight friends (that I know of) on the top of iTunes ‘New & Noteworthy’ list. For those unfamiliar, when a podcast is submitted to iTunes it spends the first eight weeks in this list (which is where most people search for new shows). Hitting the top of this chart (and staying there as long as possible) creates a whole surge of organic traffic… and it’s super simple to do.

A motivational note to the über noobs, I know someone who generated a massive audience for their podcast… which was recorded in a car on an iPhone headset. 95% of the barriers to entry are mental. With planning and strategy, it’s an easy way to develop an audience and an even better way to make friends.

The iTunes algorithm measures velocity, not quantity. This means that the numbers matter far less than the time in which they were measured. They look for:

All of that is exponentially more significant when compacted in a single day.

I got the Ghost Influence Podcast to the top of New & Noteworthy with 35 reviews compacted into the first week. This isn’t to say I released the show and sat back to wait. I spent the entire week having personal (private) conversations with people to move (as organically as possible) to ask (or bribe) them to help me, often saying:

I truly hate being “that guy” but I just launched the Ghost Influence Podcast (interviewing people who’ve gone viral) and it would mean the world to me if you could subscribe, rate, and review the show. iTunes measures this as being unreasonably significant and it would be amassive help. Can you spare five minutes? l’m not above bribery.

That, and that alone, was what garnered the 35 reviews I needed to rank at the top of the list. When I say “digital empathy creates social leverage” this is what I mean.

So… all you wonderful people. Let’s help Jules get Unconventional Life to the top of iTunes. She’s offering one lucky listener an hours consulting call with me, but for anyone reading this… if you send me a screenshot of your review, I will give thirty minutes of my time. During that time, I will learn (more) about you and do something to move you forward in a quantifiable way (actionable advice, an introduction, etc.)

… and now you understand why it’s so difficult to get a review in iTunes. As much as I love all of their products, the iTunes store has been in desperate need of a new user experience for the better part of a decade. It would mean the world to both Jules and I if you could go through this clunky process… your vote matters (a lot).

Always the first to lead by example, this was the review I just left: 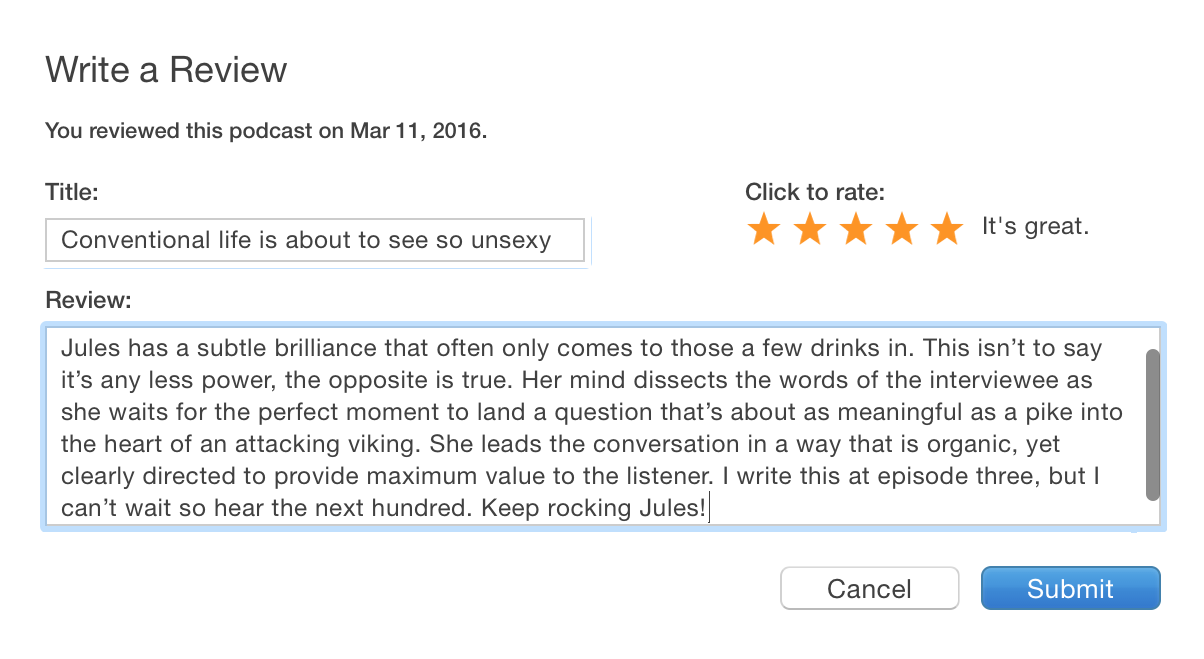 As was first brought to my attention by Rich R. and Daniel A. humblebrags aren’t of great interest to you (and justifiably so). King M. quantified the appropriate mix which I shared in ‘Stories vs. Lessons‘. I’m open to criticisms, but I’m curious to know… was this massive humblebrag appropriately balanced with actionable insights?